After publishing this, I was able to chat with Alison at Quartz (new newsletter out today) and talk through some of the methodological differences between what Nathan (Louisville) and I did. I wanted to update the post with some new numbers that show a more consistent picture with Louisville. Primarily, my method used below assumes that scooters with a final ride of 12-31-2018 were removed from activity on that date. This is probably not a safe assumption, so I’ve re-calculated the lifespan using only scooters that left Indy before December 1, 2018 and never reappeared.

With that limit, the overall lifespan is 28 days, still longer than the 23 days found in Louisville but not drastically more. More importantly, Alison and I talked about how it would be more valuable to know how many of the “lifespan” days the scooter was actually used (“active use days”). Running this calculation reveals that the average scooter was only used on 15 days of its lifespan in Indy. For Birds, the overall lifespan is 26 days, with 14 active use days, and for Lime, the lifespan is 30 days with 17 active use days. Later on in the week, I’ll draft up a new post with updated numbers using these same cohort criteria.

I keep telling everyone in my department about “the scooter data.” They’re all probably sick of it by now. Long story short, the City of Indianapolis has made trip-level electric scooter data available, and I’ve had the pleasure of doing some fun analyses on these data over the past couple of weeks. Those of us in the Health Policy & Management department are actively thinking through some public health-related analyses to couple with these data, so I’ll have more updates over the next few months. Think ED visits for scooter injuries, air quality implications, traffic accidents, etc.

Earlier this week, Alison Griswold, a reporter at Quartz covering the sharing economy, posted some analysis of Louisville, KY scooter data in her newsletter, Oversharing. She  noted that the scooters do not last very long (average lifespan of only 28 days!) and this makes it difficult for Bird and Lime to recoup the costs of each scooter ($551 per Bird scooter according to The Information). Alison posted some great summary statistics of the Louisville market based on work done by Nathan Stevens and then calculated average per-scooter profitability (i.e. did they recoup the cost of the scooter). I wanted to compare Indy’s data to that of Louisville. All of these data are for September through December of 2018. The Louisville data looked at August-November of 2018 (the first four months of usage in Louisville). So both look at four-month spans. My analysis differs in that I have both Bird and Lime, and there are some important differences between the vendors that we see play out in the stats below. I start with a summary table of the differences and go into more detail in the following sections.

I calculated this by looking at the earliest trip start date and the latest trip end date to create a “days active” for each scooter. Keep in mind that this did not account for gaps in usage of a single scooter, for example a 6-day gap for maintenance after which the scooter was re-deployed.

These numbers actually stray quite a bit from the Louisville numbers. In particular, in Indy we see lifespans 19 days longer, but fewer total rides (perhaps due to the greater number of scooters deployed here, see next section). We also have considerably lower mileage lifespans, fully 35 miles less than the filtered data in Louisville. This is probably due to a combination of considerably shorter average trip length in Indy and greater supply of scooters (see next section).

Some additional context here: Lime scooters operate 24/7, while Bird scooters are collected and charged after 9pm. Legally, scooters are permitted to operate 24/7 as long as they have headlamps, which both types do. But, due to Bird’s more regular collection times and automatic function that turns them off, we see more utilization of Limes, mostly driven by the fact that they are the only scooters available after 9pm. For example, take a look at this plot of hourly ride numbers from early October. The black bar essentially disappears at 9pm each day. Those early Birds (ha.) are from re-distribution of fully charged Birds early in the morning.

*I don’t have deployment statistics because my data only contains trips, i.e. scooters that were used.

And finally, here’s what these cost recoupment numbers look like graphically. 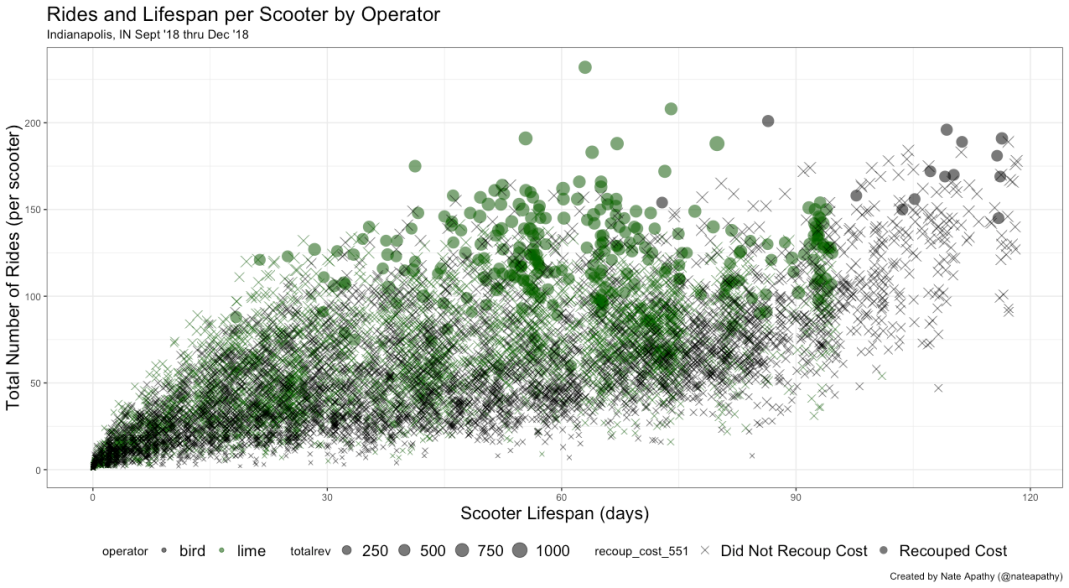 A note on methodology: I followed Nathan’s approach in filtering out some of the rides that appeared to be spurious or in error. My filters were: